Leeds United star Raphinha is a summer transfer target for Barcelona. On May 6th, Mundo Deportivo reported the La Liga side are aware of the winger’s intention to join them after this season.

Today’s edition of Mundo Deportivo states Xavi Hernández wants to sign eight new players in the next window. One of the positions he is looking to strengthen is the wide position, where the Brazil international is a target.

They state there are ‘advanced negotiations’ between the La Liga side and the Leeds United player’s agent, Deco. The representative, who previously played for the Blaugrana, has close ties with Barca president Joan Laporta.

It’s claimed the Spanish giants are waiting to see where Jesse Marsch’s side finish this season, before making an approach.

The Whites suffered a 3-0 defeat at the hands of Chelsea on Wednesday. The loss has left them in 18th spot with 34 points after 36 games, level on points with 17th placed Burnley, who have a game in hand and a superior goal difference. 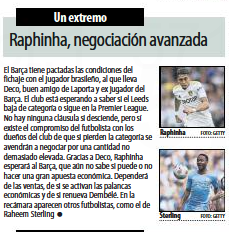 Mundo state Raphinha will not have a release clause if Leeds are relegated.

However, there is said to be some sort of commitment from the Leeds towards South American, to let him leave for ‘not too high an amount’, if the club drops from the top division.

The attacker isn’t sure whether Barcelona will be able to invest to secure his services. That’s because his arrival will depend on their sales, economic conditions and whether or not Ousmane Dembélé continues at the Camp Nou next season.