Manchester United are one of the very few big clubs who haven’t really been linked with Adrien Rabiot.

Sure, there must have been mentions at some point, but for quite some time they’ve been out of the picture. In the Premier League, the clubs most linked in recent months have been Chelsea, Liverpool and Tottenham Hotspur.

Ahead of the winter window it was reported that PSG would look kindly on selling the player to Spurs, a club considered friendly after previous business, but Rabiot wasn’t keen.

Saturday’s edition of AS explains that Barcelona are backing away because they don’t really have the need any longer and they feel the player is perhaps playing hard to get too much.

As part of their story, the Spanish newspaper state a ‘source close to the negotiation’ has said: “Given the interest of Juventus, Bayern Munich and Manchester United, requests were increasingly higher.”

That’s financial requests, in terms of signing on fee and wages. Juve and Bayern have been repeatedly linked, so that’s no surprise.

Rabiot is often portrayed as greedy for getting in this contract situation, but PSG hold a lot of the blame themselves. He last signed a contract in 2014 and the wise thing would have been to start renewal attempts a couple of years later, and that probably would have been the fair thing too given how quickly PSG wages were rising.

Right now at the French club, there are at least fourteen players paid more than Rabiot. That’s according to L’Equipe’s annual wage lists which were released on Friday. The midfielder wasn’t in the top 30 top salaries in Ligue 1. 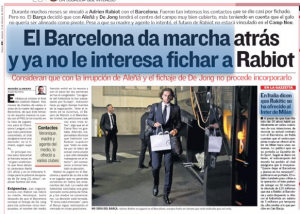 His wage wouldn’t be an issue for Manchester United, if the interest is real.

Recently, PSG fans have been calling on the club to play the Frenchman, with him currently ostracised due to refusing a renewal.

There’s a lazy reaction from some fans to dismiss Rabiot’s ability and instead go off on a tangent whining about what they think they know about his mother, who is also his agent.

L’Equipe’s ratings have Rabiot as the eighth best player in Ligue 1 so far this season.