Home Europe Player ‘a step away’ from Everton, club finalising his transfer to Goodison...
SHARE

It was also explained the Portugal international has agreed personal terms with the Merseyside club, while the Hammers failed to convince him to join them.

Last season, Barcelona allowed the midfielder to go on loan to Goodison Park, where he impressed, which is why the Toffees want to sign him on a permanent transfer.

Friday’s edition of Catalan newspaper Sport now claims the former Valencia man is ‘one step away’ from signing for Everton.

There are other English clubs interested in the player, but Gomes’ ‘determination’ is to only play for Marco Silva’s side, which has limited the La Liga club’s options.

The 25-year-old’s agent recently made a trip to Barcelona, which is why his transfer to Everton has accelerated. 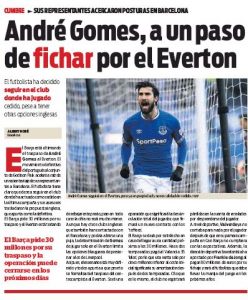 The Spanish champions are demanding €30m to part ways with Gomes but the club from Liverpool are trying to lower the fee. Sport claim the fee is unlikely to reduced.

Barcelona are finalising Gomes’ transfer to Everton and he is ‘a step away’ from joining Silva’s side on a permanent deal.