After struggling for two years at Barcelona, Andre Gomes impressed while on loan at Everton during the 2018/19 season.

The La Liga winners want to offload the midfielder in the summer transfer window and he’s attracting interest from the Premier League, with Everton, his loan club, West Ham, Tottenham and Arsenal all linked recently.

Wednesday’s edition of Mundo Deportivo explains Ernesto Valverde’s side are planning to complete the sale of a few players before the end of this month and the 25-year-old’s name is included on the list.

However, West Ham are offering more to Barcelona. 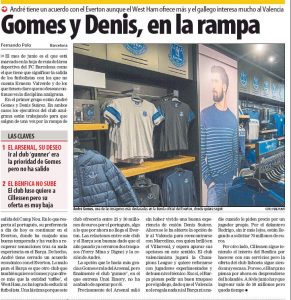 Mundo explains it’s a ‘pity’ because the Hammers are willing to pay a fee between €25-30m to Barca, which it’s stated Everton are not.

It’s a surprise this has dragged on to this stage, and if Gomes is really set on staying at the Merseyside club then an agreement will need to be found.