Although there seems to be no updates on Shoya Nakajima’s departure from Portimonense, the Portuguese press continues to push the rumour to get more stories.

Before the player entered the pitch to face Benfica last night, local newspapers said this could be his final game for the club, as Wolverhampton, Southampton and Leicester City were all trying to take him in the January transfer window.

With Nakajima playing the Asian Cup this month, Portimonense may have had their last chance to use him before he signs for a new side.

Now after the match, the story is repeated. A Bola brings an article saying this could be this farewell match, as Wolves and Porto could both land him soon.

It’s interesting how they don’t give Southampton and Leicester City a mention this time, and pick the Wolves as the main contenders for the Japanese star. 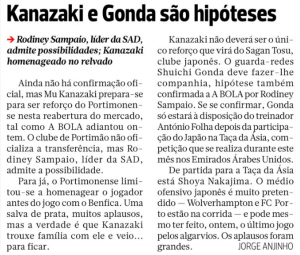 Despite A Bola’s claims of a ‘farewell’, newspapers O Jogo and Record both point out that Portimonense will ask Japan the permission to use Nakajima in the match against Marítimo next weekend.

A deal between Portimonense and Wolverhampton was said to be ‘80% done’ last month, but apparently it didn’t go through.