Loaned to Monaco for the second half of the season, Carlos Vinicius didn’t feature all that much under Leonardo Jardim, yet still managed to impact here and there.

The towering striker scoring two goals and picked up two assists in 16 league appearances, although most of those came from the bench as he started just three of those games.

Contracted to Napoli, the Brazilian could be on the move yet again, as Corriere dello Sport‘s local edition for the Naples region believe there is an interest from Wolverhampton in his services.

With Raul Jimenez the sole natural striker Nuno Espirito Santo seems ready to rely on in his squad, someone might need to be recruited this summer, and the Italian outlet believe it could be Vinicius. 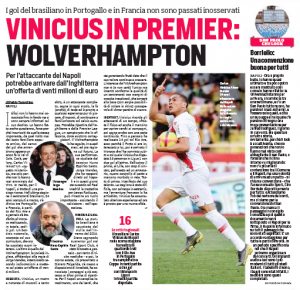 According to them, Wolves are ‘intending to put €20m on the table’ for the 23-year-old after ‘following him the past months’ as the Portuguese manager ‘studied his performances’.

Of course, such a story would be complete without the obligatory mention of Jorge Mendes, who could return in ‘an important role’ to assist the player in the operation.

However, Corriere dello Sport explain Wolverhampton’s interest isn’t (and won’t be) the only one for a striker who has ‘unexplored potential’.

If Napoli do manage to sell Vinicius for that impressive €20m figure, they would be making a good profit on a player they signed from Real SC in Portugal for £3.6m just last year.

The forward spent the first half of last season on loan at Rio Ave FC where he scored 14 goals in 20 appearances in all competitions.