Newcastle United are one of the clubs with the ‘economic power’ to get Colombian star Luis Diaz out of Porto.

That’s according to O Jogo, who say the Magpies are one of several clubs ‘keeping a close eye’ on the forward’s performances.

Diaz was heavily linked with a move to the Premier League in the summer, but Porto’s demands for at least €50m, meant a deal never happened.

He’s continued to shine for the Portuguese giants since, with a series of impressive performances for club and country, meaning half of Europe remain keen on his signature.

His tally of 11 goals and two assists in 16 games in all competitions has not gone unnoticed, and a big move only seems a matter of time at this point.

Newcastle are one of those who have been linked courtesy of their takeover, and O Jogo say they are one of the clubs with the money to get him.

They’re reportedly ‘keeping a close eye’ on his development, with it increasingly likely that he won’t see the end of his contract at the club, which runs until 2024. 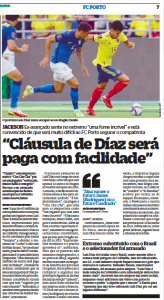 That’s because of the €80m release clause in that deal, a figure that is increasingly looking like a bargain for the biggest clubs.

That’s an opinion shared by former Porto forward Jackson Martinez, who believes “that clause will be paid with ease” by someone soon.

In fact, O Jogo posit the question ‘what is €80m?’ when you’re getting a player like Luis Diaz in return.

Apparently nothing for Newcastle, who continue to be linked and are apparently keeping a close eye on the Colombian’s increasingly impressive displays.