Fanatik report Besiktas midfielder Gary Medel has been unable to agree personal terms with West Ham United and it now seems the Chile international will join Marseille instead.

Medel has been linked with a move to West Ham for several months, following claims the player wants a return to the Premier League.

With the Copa America now finished, the Turkish newspaper reports the 31 year old is likely to leave the Super Lig club and he’s informed Besiktas’ board of his decision to play elsewhere next season.

According to Fanatik, West Ham have had a long-standing interest in Medel, but the former Cardiff City midfielder couldn’t find an agreement with the Hammers. West Ham manager Manuel Pellegrini has reportedly been keen to bring in his compatriot.

It’s claimed Marseille officials will now arrive in Istanbul in the coming days for talks with Besiktas and the Black Eagles are looking for ‘significant money’ from the sale of the player. 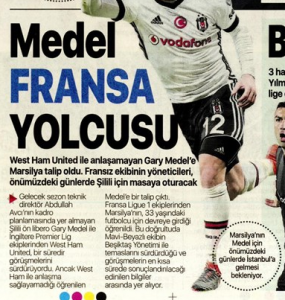 The veteran has made 49 league appearances during his two seasons in Istanbul and is under contract with Besiktas until June 2020.