The outlet says the 24-year-old has been approached by a few Premier League clubs, but it’s the Hammers who really made an attractive offer.

The problem is that the situation is a little complex because Palhinha belongs to Sporting, and is in the middle of a two-year loan spell at Braga.

The agreement between the clubs says that in case of a sale, Braga not only are paid a fine, but also have the chance to match the offer.

That’s why Record talks about the possibility of the Portuguese club using this clause to buy him and then sell him to the Premier League demanding the terms they want. 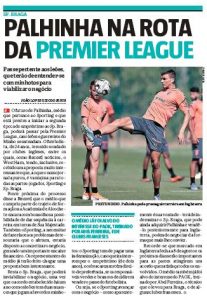 Palhinha reportedly sees the move ‘with good eyes’, since the chance to continue his career in the Premier League would be something great for him, but Record are still to report the details of the bid.

He doesn’t look like an expensive player, but we all know how Portuguese clubs like to make big demands when Premier League sides come for signings.