West Ham United have made an ‘important offer’ for Juventus youngster Luca Pellegrini, with their efforts scaring off the competition.

That’s according to Corriere Dello Sport, who say Monza believe the player will be ‘difficult’ to sign because of West Ham’s efforts.

The Hammers have been linked with a move for Pellegrini throughout this week, with it reported on the 20th that his agent had been holding talks with David Moyes and co.

That was backed up two days later with a €10m deal mooted, and it was explained Pellegrini wants to secure a transfer this summer.

It was then made clear that his agents remained in contact with West Ham about a move, although an agreement was needed on what sort of deal he would sign at the London Stadium. 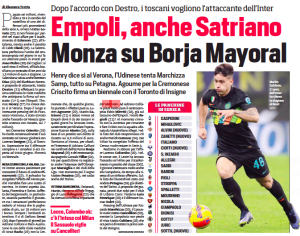 Corriere now follow this up and say the defender has received an ‘important offer’ from West Ham, although the nature of this bid isn’t made clear.

What they do say, though, is that Pellegrini’s other suitors ‘consider it difficult’ to sign the 23-year-old because of the effort being made by the Hammers.

That suggests they have a chance of getting their man, although we’ll have to wait for more details before getting overly excited about the prospect of this transfer.