On August 24th, Sport reported Rafinha’s move to Arsenal or West Ham isn’t ruled out and Everton were pushed forward as an option.

It was also suggested the Barcelona player has a desire to play in the Premier League next season.

The 27-year-old’s current deal expires next summer and he has a €16m release clause in his contract.

Mundo Deportivo now reports the attacking midfielder is one of the players Barca are looking to sell this summer and he’s hoping to sort out his future soon.

The report talks about the clubs that have approached the La Liga side to ask conditions to sign Rafinha. This includes clubs from Spain, England and Italy.

From the Premier League, the Hammers, Carlo Ancelotti’s side and the north London club were watching the Brazilian. Lazio retain an interest, while other unknown clubs have asked about him. 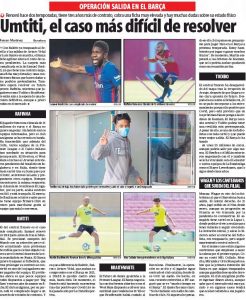 Barca have always communicated to West Ham, Everton, Arsenal and others that they are not ready to negotiate, and are only looking to sell him for €16m this summer.

Rafinha, for his part, remains calm, even though he wants to resolve his future.

He spent last season on loan at Celta Vigo, managing four goals and two assists in 32 matches in all competitions.