West Bromwich Albion have been given another month to decide whether to turn midfielder Matheus Pereira’s loan deal into a permanent one.

The Brazilian midfielder joined the Baggies on loan in the summer transfer window, with an agreement in place for the Championship side to sign him permanently this summer.

That’s something they are keen on doing with the 23-year-old establishing himself as a star at the Hawthorns, scoring six goals and registering 16 assist in 34 games so far this season.

However, as is the case around Europe, West Brom are facing financial difficulties as a result of the outbreak of COVID-19 and the subsequent suspension of football around Europe.

That has led to them asking for an extension before activating the clause, something Sporting have granted, according to Record.

The newspaper explains that West Brom can make his deal permanent for €9.5m, although, contrary to reports, that has not been activated yet.

The delay has not yet ‘jeopardised’ the transfer and the Baggies ‘plan to invest’ in the midfielder but are suffering from ‘cash flow difficulties’ because of the current pandemic. 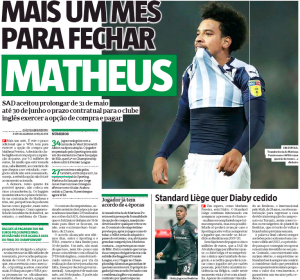 That is why Sporting have agreed to grant them 30 more days to officially sign Pereira and pay up, with the original agreement stating that they had until 31st May to make a decision.

The new agreement now gives them until 30th June but ‘no more than that’ and there will be no further deadline, particularly not one that coincides with the end of the Championship season as has been claimed elsewhere.