West Bromwich Albion wanted to strengthen their attack in the winter market and they succeeded after taking Mbaye Diagne on loan from Galatasaray on January 29th.

The forward arrived at The Hawthorns having scored 11 goals in all competitions for the Turkish side in the first half of the season.

Despite signing the Senegal international, the Baggies looked to bring another striker in the final hours of the recently concluded window.

It’s claimed the La Liga side received a late call from the Premier League club to take the Denmark international on loan with a ‘non-mandatory purchase option’. 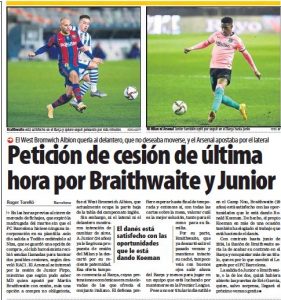 The former Middlesbrough man, who did not show ‘any intention’ to change clubs midway through the season, ‘didn’t see with good eyes’ the option to leave Ronald Koeman’s side and that too for a side who are in the relegation zone (West Brom 19th in the table).

Braithwaite has a contract until 2024, and despite his limited role, he is ‘satisfied’ with the opportunities provided to him by Barcelona manager Ronald Koeman.