Aleksandar Mitrovic was supposed to be returning to Anderlecht.

Well, he did actually return to Anderlecht, there was picture proof, but his transfer to the club fell to pieces at the last minute.

In Belgium there was initial confusion and even a claim it was because Islam Slimani had failed his medical at Newcastle United, but now Het Belang van Limburg have explained what actually happened, and how Mitrovic ended up at Fulham instead.

Mitrovic arrived at Anderlecht’s offices early on Wednesday evening, knowing his move to the club was in the balance. He knew the club had to get rid of Lukasz Teodorczyk because they couldn’t afford to pay both him and the Serbian striker.

Taking things into his own hands, Mitrovic ‘put pressure on Newcastle to continue to pay his salary’ (around €1m for the rest of the season) and then waited for four hours. At 9pm, Newcastle contacted Mitrovic and told him they’d had a better proposal from Fulham, but he still wasn’t giving up and waited another hour.

When he finally gave up, it was too late for Fulham to get a medical done, so given Mitrovic was at Anderlecht’s offices, their club doctor Marc Van Grinsven did it for the London club.

Anderlecht, left without Mitrovic, then gave their manager a list of attackers who could be signed in the very short time available. He picked Lazar Markovic, remembering the 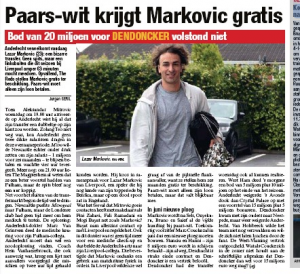 Liverpool player from his Benfica days.

There was no time for a medical on that either, and Anderlecht’s doctor, probably a little confused by this stage, had to telephone his counterpart at Liverpool for an assurance that Markovic is indeed well.

Then, hopefully, all Anderlecht’s staff went out and downed an obscene, but well deserved, amount of Belgian beer.