Manchester United hit a bump in the road of their early season on Tuesday evening.

Top of the Premier League and with a good feeling around the club, Ole Gunnar Solskjaer’s side started the match well with a goal from Cristiano Ronaldo. However, Young Boys refused to simply sink and carried with their own game.

In the 35th minute, Aaron Wan-Bissaka received a straight red card, and Manchester United didn’t respond well. With the benefit of hindsight, they likely should have become more compact, but were too open and couldn’t get any control in midfield, despite Fred seemingly attempting to do the job of two players.

The second half was at times an onslaught by the Swiss side and they got a deserved equaliser, and then it looked like the match would finish 1-1. That was until Jesse Lingard misjudged a pass and handed victory to Young Boys, L’Equipe say the win was given away ‘on a plate’.

Notorious for their tough player ratings, it was always going to be interesting to see what the French newspaper made of the performance. L’Equipe call it a ‘waltz of blunders’ and say there were repeat individual mistakes, and substitutions which didn’t make sense. 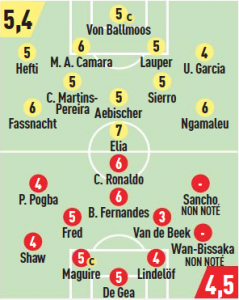 Perhaps unsurprisingly, they say France international Anthony Martial should have been brought on earlier.

Two players were given zero marks, Wan-Bissaka and Jadon Sancho, with the latter coming off in the 37th minute following the red card.

Donny van de Beek was next worst with 3/10, and the trio of Paul Pogba, Luke Shaw and Victor Lindelof all got 4/10.