Over the past few months, we’ve covered one off claims from the Catalan media linking players like Harry Kane and Marcus Rashford with a move to Barcelona, but the same report would also explain why a transfer seems complicated or difficult.

The La Liga winners are looking to bring in a player who can be a long-term successor for Luis Suarez.

On March 26th, Mundo Deportivo reported the Manchester United forward is ‘on the agenda’ of Barcelona.

It is for the second day in a row that Mundo Deportivo are linking the 21-year-old with a move to the Camp Nou. Again, his contract is referenced.

It will expire in 2020 and so far he hasn’t signed an extension. But, again, Mundo completely ignore Manchester United’s option to extend it by a further year.

Given this is largely the basis for their story, it doesn’t reflect well.

Ernesto Valverde’s side are aware if they approach the Premier League outfit for their academy graduate, they will state the player is not for sale or names a price tag which will be way too expensive for the Spanish champions.

The report claims the Bluagrana have some cards, with which they can negotiate for Rashford’s potential transfer… and one of them is Philippe Coutinho.

Mundo reports the former Liverpool star has long been on the 20-time English champions’ agenda and they have already contacted his agents to let them know.

They further go on to explain Manchester United are ‘very attentive’ to Coutinho’s situation and are convinced they can seduce him to lead their project for next season.

Given the strong interest from the English club, as Mundo see it, it could help Barca’s Rashford aim.

It is further claimed that if Coutinho doesn’t want United, Barca are willing to offer Malcom as a part of a deal for Rashford.

Mundo’s report on Coutinho-United is contradicting to what AS reported four days ago. 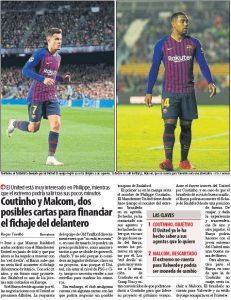 The Spanish newspaper explained the Old Trafford side have not responded to Coutinho’s representatives after the agents offered the midfielder to Ole Gunnar Solskjaer’s side.

This all feels like nonsense, and nonsense which is getting increasingly complicated.