Home Europe Valencia could be set to swoop for Sporting Director, best known for...
SHARE

Valencia’s situation this season has seen a lot of self harm, with fans of the club frustrated with how owner Peter Lim is running things.

And now there’s some interest for Barcelona.

Recent managerial change led to repeat calls for Lim to pack up, sell the club, and return to his other business interests. There can be no doubt that the businessman is aware he isn’t popular among fans of the club, and this is a situation which has been building for quite a while.

This week, we covered claims from El Confidencial, who explained Lim is ready to consider a sale. Offers are said to be coming in, and those approaches will be considered rather than immediately dismissed. 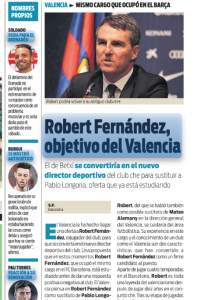 to appoint a new Sporting Director. The man being targeted is Robert Fernandez, best know for his time with Barcelona.

Robert is considering an approach from Valencia, and it’s been thought he’s keen to return to work following his departure from Barcelona some time ago.