Wolverhampton Wanderers winger Daniel Podence is one more player who’s been having live chats with fans on Instagram.

The 24-year-old had a Q&A session with his followers on Sunday, and there were a lot of Sporting supporters speaking to him.

That’s why one of the questions was obviously about a possible return to the Lisbon side, but that wasn’t taken very well by the player.

“After all that they put me through and what I continue to read and listen to, it’s very, very unlikely. But life takes many turns,” he said (via O Jogo). 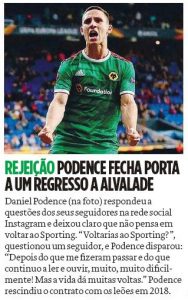 Daniel Podence was part of Sporting squad which was attacked at the Alcochete training centre in 2018. He was then one of the players who rescinded their contracts following the incident.

There are several players, including Manchester United’s Bruno Fernandes, who say they don’t mix things up and would return to Sporting with no problems, as that issue was heavily related to the time when Bruno de Carvalho was in charge of the club.

But it seems Wolves’ Podence still holds some heavy feelings over what happened in Lisbon.