For the past week, there’s been a big doubt at Porto regarding the physical situation of Pepe, who was injured in the Champions League fixture against Atletico Madrid.

With manager Sérgio Conceição giving regular updates on the captain, there was hope he could feature in the Portuguese league, and finally be ready to start against Liverpool on Tuesday.

It turns out Pepe stayed out of the win versus Gil Vicente on Friday, and as things stand, he isn’t fit enough to even train yet.

According to Record, the 38-year-old did not take part in the squad’s practice today. This was the last session prior to the Liverpool game, and Conceição should talk about it in a press conference this afternoon. 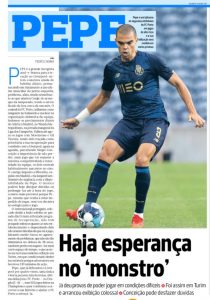 Pepe is considered to be of huge importance for Porto’s defence, and proof of that is a headline today featured by A Bola, which talks about their hope the ‘monster’ will be able to help out.

It’s pointed out that the centre-back has proven ‘he can play in difficult situations’, as he had a ‘colossal exhibition’ against Juventus in Turin this year.

Porto will be missing Chancel Mbemba due to suspension, and that’s why Pepe’s participation in the game versus Liverpool would be so important. That’s why we won’t be surprised if the Dragons wait for his recovery until the final minutes before the match.