With Real Madrid again being linked to Manchester City loanee Pedro Porro, the Portuguese media can’t hide how good this situation is for Sporting.

The Lions have had the fullback in Lisbon since the summer of 2020, with a right to make his move permanent until the end of this season, following a very good deal they made with the Premier League side.

As written by O Jogo, Porro’s value at Transfermarkt used to be €9m at the time Porro moved to Portugal. And that agreement gave Sporting the chance of signing him permanently for only €8.5m.

Now with the player’s good form shown with the Lions, his value has risen to €20m, while the Lisbon side already have a personal agreement for his signing. 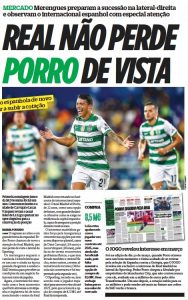 Following the most recent news from England and Spain saying Real Madrid are interested in Porro, O Jogo recalls they revealed the Galacticos’ chase back in March, as the club’s first approach for the signing was made a year ago.

Since Sporting have a deal to sign him until 2025, as they only have to trigger the €8.5m buying option, the newspaper writes that the Portuguese side could end up making even more than the €20m the player is valued at now.

O Jogo recalls that Manchester City ‘never counted on him’, and that’s entirely true, given that Porro never had a chance to play for the club since being signed from Girona in 2019.