Anderlecht’s Albert Sambi Lokonga has agreed personal terms with Arsenal, according to various reports from Belgium.

Journalist Sven Claes took on to Twitter to make this claim, and added the midfielder and the Gunners found an agreement a week ago.

Claims made by Claes are echoed by Monday’s edition of Het Nieuwsblad, who state the 21-year-old has ‘reached an agreement’ with the north London club for a ‘long-term contract’.

Both Claes and the newspaper are reporting Mikel Arteta’s side have made an offer worth €17m [€14m plus €3m in bonuses].

The two sides ‘have been negotiating for some time’, and the proposal made by Arsenal hasn’t been accepted yet by the Jupiler Pro League side.

🟣⚪️ ➡️ 🔴⚪️ Arsenal have made a 14 + 3 million (bonuses) offer for Sambi Lokonga (21, 🇧🇪) from Anderlecht. Negotiations still ongoing. Personal terms have been agreed since a week ago. #ArsenalFC pic.twitter.com/GeQtjLuXNE

That’s because the team led by Vincent Kompany want more, especially with Sevilla and Atalanta lurking in the background for the Belgian.

Despite Sevilla and Atalanta wanting the player, Lokonga has set his sights on making a 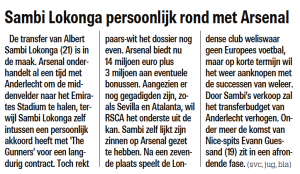 switch to the Emirates, and has already agreed personal terms with Arsenal.

Lokonga’s summer sale will help Anderlecht to raise funds, which would then be invested in strengthening the squad another of the new season.