On Wednesday, Mundo Deportivo stated Chelsea ‘want’ Jules Koundé and Sevilla have ‘promised to sell’ him, after refusing to let the defender join the Blues last summer.

Later that day, Sevilla chief José Castro admitted “we need to sell” some players to “balance the books”.

Apart from Chelsea, Barcelona are credited with interest in the centre-back. However, they cannot pay his €90m release clause and can only sign him by offering some of their own players as part payment.

Having failed to take him away from Sevilla in 2021, the west London club want to make another attempt for the 23-year-old, according to multiple claims from Spain.

These claims are backed up by Mundo Deportivo. They say the ‘London club will return to the fray this summer’ for the France international since they are set to be without Antonio Rüdiger and Andreas Christensen next season.

Reports in England yesterday stated Thomas Tuchel’s side plan to step up their efforts to sign Koundé. These claims are relayed by another report from Mundo, who then mention both Chelsea and Barcelona.

It’s claimed the Premier League side, unlike Barca, have the ‘financial capacity’ to carry out the operation for the former Bordeaux man, without including any of their players as part of the deal. 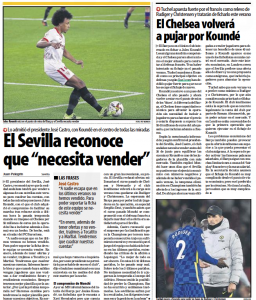 Sevilla prefer an ‘offer of only money’ rather than player-plus-cash for the Frenchman. The Blues can offer ‘only money’ and there’s belief at the Camp Nou that Chelsea’s offer will be higher than what Barca could propose for Koundé.

Sevilla’s stance is to sell their star and Chelsea’s desire is to sign him this summer. These two factors plus Barcelona’s financial situation make it ‘very complicated’ for Xavi Hernández’s to take Koundé away from his current club.

There are several conditions that put Chelsea ahead of Barca in the race for the player.