With Luis Suárez turning 33 in January and having 18 months left on his contract at the Camp Nou, Barcelona are looking for his successor.

Journalist Miguel Rico, writing on the last page of Mundo Deportivo claims the La Liga winners have made strengthening their strike force a ‘priority’, which is why they are following Lille’s Victor Osimhen.

The Nigeria international has 10 goals and two assists, and the first assessment of him is ‘good, but not that good’. This means the player will need to be more convincing, if the the Blaugrana are to consider making an approach for him.

Rico also talks about Inter Milan star Lautaro Martínez and he claims the Argentina international is the ‘best placed’ target to replace Suárez at the Catalan club. 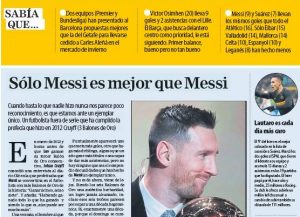 Martínez scored twice in the Nerazzurri’s 2-1 victory over SPAL and that helped Antonio Conte’s side climb to the top of the Serie A table. He has taken his overall tally to 13 goals and three assists this season.

Despite Barcelona’s interest, Inter are planning to offer him a new deal that will see a rise in his wages and a buyout clause. His current release clause is set at €111m.