It followed a previous report from January 8th, which stated Spurs were keen in the young Dane, who is shining at Sampdoria under Claudio Ranieri.

Bought for around €6m, it’s believed the 20-year-old has already tripled his value in the past few months, and Gazzetta dello Sport believe ‘half the Premier League that matters’ has set its eyes on him.

Tottenham, so far, have been the only English club named as far as we can tell, trailing a player ‘who promises to amaze’ between now and the end of the campaign, with Ranieri seeing in him ‘characteristics of a true talent’. 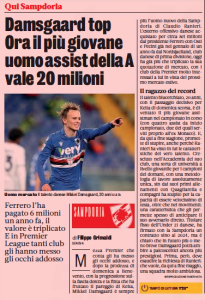 With a contract until 2024, Damsgaard is well protected these days, with Sampdoria in no rush to sell, ‘but it’s clear that in the more or less short future, he will be able to aspire to even more prestigious stages’.

Whether Tottenham are among those remains to be seen, but they have been said to be ‘crazy’ about him, and if Daniel Levy wants someone, he tends to do his best to get him.