Agents and Galatasaray appear to be building a transfer deal to present to Manchester City. The story is a big deal in Turkey, and the man involved is Eliaquim Mangala.

Turkish newspaper Hurriyet report in their Thursday edition that Mangala has been offered to Galatasaray via agents, and the Turkish club are very keen on the idea. Mangala is presented as huge star, and the amount Manchester City paid Porto for the defender of course gets a mention.

On loan at Valencia this season, Mangala has done well. The Spanish club have a €18m clause to make the deal permanent, but they don’t want to pay that. That’s no reflection on Mangala, and Valencia are likely making a mistake if they don’t agree a permanent deal.

Hurriyet value the Manchester City owned defender at €15m, which looks like a reasonable fee for the English club to move on. However, they want first to present a loan 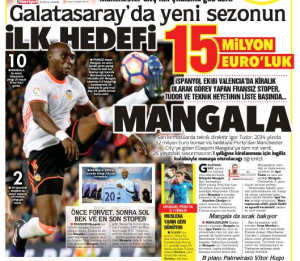 to Manchester City, there’s no immediate intention to actually part with any serious money.

Now the agents and Galatasaray have got all that worked out after talks, they need to convince Manchester City. A loan with a compulsary €15m purchase option looks reasonable, a straight loan is no use to City when there are surely other options out there.