It seems Everton may have missed a great chance to sign Sporting midfielder Matheus Nunes in the summer.

The Toffees were heavily linked to the 23-year-old during the last transfer window, with the Portuguese media insisting that an agreement for a deal worth €18m was close.

Now that the move never happened, the local press is talking about the ‘crazy days’ Nunes has been living, as his status had a big change lately.

The player first became a regular starter for Sporting, where he had the chance to make his debut in the Champions League. Then he was called up both by Brazil and Portugal, choosing the latter, where he won his first cap at the weekend. 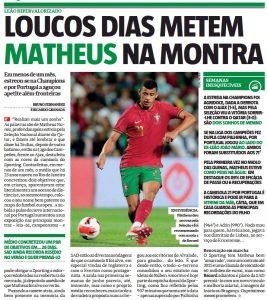 That’s why newspaper Record recalls that he had several approaches in the summer, ‘especially coming from England and with Everton as a protagonist’.

The outlet recalls that the transfer until June ‘seemed, even, imminent’, but the offers never really arrived.

Now in a different situation, Nunes is said to have a renewal process going on. He’s set to sign a contract until 2025 and be protected by a release clause of €60m. A clear sign that if Everton come back for the midfielder, they shouldn’t have a chance to sign him for anything like €18m.