Portuguese newspaper O Jogo today features a piece on Sporting midfielder João Palhinha and the final stretch of the season he’s about to have.

Following injuries and suspensions, the player hopes to recover his good form and draw bigger attention in the transfer market, as both he and the club expect a move this summer.

With Tottenham Hotspur and Wolverhampton Wanderers already linked to the midfielder in the past, they are both named by O Jogo once again today as two of the candidates to land him.

The newspaper writes that ‘many clubs’ follow the player, even though the approaches haven’t reached the €30m request so far. The ‘attentive’ Spurs and Wolves are mentioned, along with Paris Saint Germain. 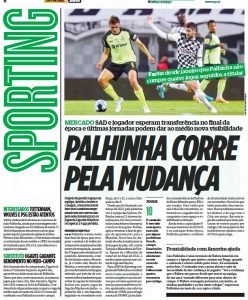 Regarding Tottenham, O Jogo claims that Antonio Conte’s side ‘study the signing of a midfielder’ for the summer window. And on Wolverhampton, it’s claimed the club are attentive to targets who could replace the potential departures of Ruben Neves and João Moutinho.

Even though Sporting want to make €30m with Palhinha’s sale, the newspaper admits it will not be easy for the Lions to get that amount, especially if the midfielder fails to impress and win back his place with the national team in these final months of the season.

With Spurs and Wolves linked to him for a long time, perhaps this would be a good chance to sign the midfielder in a bargain deal.