With Tottenham’s efforts to sign Cristian Romero taking precedent over other deals, Takehiro Tomiyasu is having to wait for a potential move to London.

Currently in Japan to represent his country at the Olympics, the defender missed out on the first game of the competition due to an injury to his left ankle, and there are worries he could miss more.

Corriere dello Sport take a look at where everything stands between Tottenham and Bologna regarding Tomiyasu, and they explain the latest physical setback ‘doesn’t appear to represent an insurmountable obstacle in the talks’ with the Serie A side.

However, ‘it cannot be excluded that it might lead to a slowing-down of the negotiations’.

Another reason why matters haven’t moved forward at breakneck speed is the fact Tottenham ‘would have preferred if Tomiyasu wasn’t called up for the Olympics’. 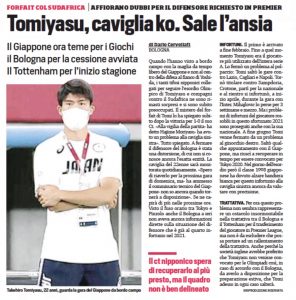 That’s because, had they reached an agreement with Bologna, they would have been able to have him immediately for pre-season.

He did, though, and so they will have to wait for the Olympics to finish to get their man, if they remain interested by that point, especially if they do manage to sign Cristian Romero from Atalanta.