Earlier this month, we covered a story from Gazzetta dello Sport claiming Tottenham were taking an interest in Pierluigi Gollini.

The former Aston Villa goalkeeper, now doing wonders at Atalanta in Serie A, was seen as an ideal way for Spurs to ‘cut costs’ as the decision of whether to renew Hugo Lloris or not starts to loom.

The Frenchman is out of contract in 2022, and it was said Tottenham were ‘hesitant’ of handing him a bumper contract.

We were skeptical, since we doubted Lloris, a normally very reasonable man, would ask for huge wages or a huge signing on fee.

Regardless, Gollini was said to be one of three names ‘narrowed down’ by Mourinho (the other two weren’t mentioned), and now we have a price for the 25-year-old.

Arriving from Aston Villa for €4m or so, the goalkeeper is now valued at €20m, with Gazzetta dello Sport once again naming Tottenham as an interested party, alongside Milan, who rate him should they decide to cash in on Gianluigi Donnarumma. 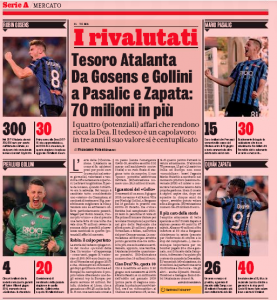 There was hope from Atalanta’s side that Gollini getting called up to the Italy squad for the 2020 Euros could get them an extra €3-4m, but since that’s not going to happen, they’ll have to make do with the aforementioned €20m.

Still, that would be a very decent €16m profit.