Tottenham continue to be linked to goalkeepers around Europe, despite there not being an immediate need at the club to sign a player in the position.

Gazzetta dello Sport do the honours on Sunday, and report Spurs are keen on Atalanta’s Pierluigi Gollini. It’s claimed the Premier League club have sent scouts to watch the player on multiple occasions and his signing is being considered seriously at Tottenham.

Gazzetta justify this by saying Hugo Lloris wants a big renewal. The 33 year old’s contract expires in June 2022, and the report states Spurs are looking to cut costs and are therefore hesitant about handing the Frenchman a bumper new contract.

However, the plan doesn’t make a great deal of sense. If they want to cut costs then signing a new goalkeeper wouldn’t appear to be on the agenda. Lloris won’t be asking obscene amounts, and it’d be cheaper to please him than go out into the market. 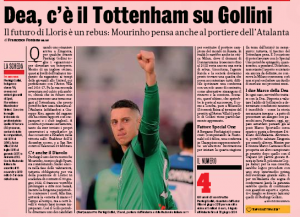 Despite that, Gazzetta insist Jose Mourinho has narrowed down his goalkeeper list to three names, of which Gollini is one. The other two aren’t mentioned.