Tottenham Hotspur have not enjoyed a good start to the 2019/20 season, just months after they made it to the Champions League final.

Despite investing to strengthen their squad, Spurs have managed only three wins in nine matches played across all competitions. This includes elimination from the EFL Cup at the hands of League Two side Colchester United.

Mauricio Pochettino’s future at Tottenham has been questioned after a poor start to the season.

Journalist Guillem Balagué takes a look at these claims in today’s edition of AS, while talking about the ‘crisis’ at the north London club.

He claims neither the club nor the players have any doubts about the Argentine and even his coaching staff are not thinking of going anywhere else.

Balagué adds all possibilities regarding Pochettino’s future did cross the latter’s mind in the summer, but the coach has no plans to leave the English side now.

The journalist goes on to blame the English press as he states ‘the idea has been installed in the media that something is wrong at Tottenham and from there to imagine the worst, they go one step [ahead]’. 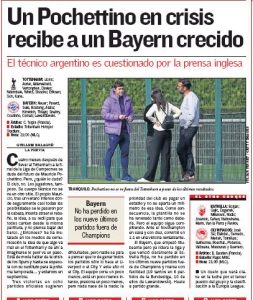 He also suggests it’s ‘fashionable’ to talk about Spurs’ crisis and who could replace Pochettino next summer, just two months into the new season.

Balagué further states Tottenham’s squad has not been overhauled in the manner in which their manager would have wanted because the club’s priority is to pay for their new stadium.

The Premier League side will now need results in their favour if they are to put these claims behind them and if not, the press will continue to discuss a ‘crisis’ situation at the club.