After last month’s international break, Norwich City stunned Manchester City as they registered a 3-2 victory over Pep Guardiola’s side.

The Canaries maintained a two-goal lead for most of the match and the English champions couldn’t avoid suffering their first defeat of the season at the hands of Premier League new boys.

The Euro U21 winner was asked if the Etihad club’s defeat to Norwich can be used as a ‘reference’ ahead of his side’s clash against the domestic treble winners.

“Mostly it conveys the idea that City are not invincible and that you can beat them, and that helps,” he said. 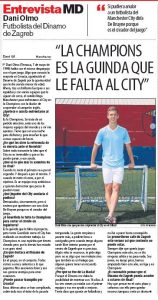 City bounced back from their disappointment against Norwich by registering a 3-0 victory over Shakhtar Donetsk and 8-0 win over Watford.

Though Olmo believes the Premier League winners are not ‘invincible’, their ability to find the back of the net on regular basis ‘amazes’ him.

“When they score the first one, then they chase for the second goal. And then for the third. And when you get the sixth, they go for the seventh. It is a very ambitious team and they want to show that few can overcome them,” Olmo explained.