Gareth Bale is set to end up in a ‘battle’ with Real Madrid when he returns from a loan spell with Tottenham in the summer.

That’s according to Marca, who say various factors mean the Welshman is set to produce a major headache for the Spanish giants upon his return.

Bale is currently on loan at Tottenham after returning to his former club in the summer, but the move has turned out to be a disastrous one so far.

The forward is yet to get going under Jose Mourinho, with injuries and a lack of form meaning he simply isn’t in the Portuguese boss’ plans.

As a result, it is unlikely that Tottenham will extend his stay come the summer, with the chances of them turning the loan move into a permanent one virtually non-existent at this point.

That’s a major problem for Madrid who, in an effort to ‘tighten their belts’ simply don’t want to be forced to pay Bale for the remaining year of his deal.

That is likely to happen, though, with the Welshman’s contract expiring in 2022 and him ‘unwilling’ to do anything to help the club out.

He was the only player in the squad to refuse a 10% pay cut last year, when asked to take part of the Covid-19 impact, and he is not considering an agreement to end his contract early or negotiate a new one. 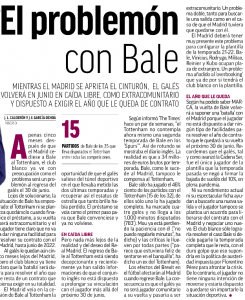 The problem for Madrid is that they don’t want him and, as a result of Brexit, he will occupy a foreign place in the squad last season.

Thus, the club are facing the possibility of Bale being left out and simply sitting in the stands collecting his wages, a prospect that the forward would be completely fine with.

The ideal situation for Madrid would be to find a new suitor, but that is difficult as his current performances for Tottenham and his spectacular salary mean nobody is really that interested in him.