Home Premier League Tottenham player ‘realises’ he has to ‘prove himself’ to Jose Mourinho –...
SHARE

Steven Bergwijn is aware he needs to prove himself to Tottenham manager Jose Mourinho, reports De Telegraaf in their Friday edition.

The Dutchman was a substitute for Spurs on Thursday evening, as Mourinho’s men beat Ludogorets Razgrad 3-1 in the Europa League. He only managed to get on the pitch for 25 minutes, but it will have been a welcome run-out given a lack of minutes in the Premier League.

Over the season so far, Bergwijn has picked up 152 minutes in the league, and hasn’t been in Tottenham’s PL match-day squads for three out of the past four games.

De Telegraaf say Bergwijn ‘realises’ he needs to ‘prove himself’ and is under no illusion about the situation or the battle in front of him.

The 23-year-old knows Spurs see a lot of potential in him and given the number of matches Tottenham face in the coming months, there’s no panic that he’ll be left without football. 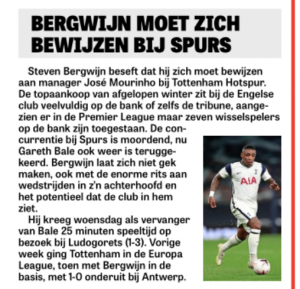 Still, it’s a difficult period and the added competition of Gareth Bale has only made things more complicated.

Mourinho is clearly happy with his attack and how things have been going, so it’s a case of patience for Bergwijn.