A few days ago L’Equipe published an article claiming Tottenham have ‘expressed a keen interest’ to sign Thomas Lemar from AS Monaco. That was it, but since then the reporting of what L’Equipe published has been twisted by sections of the English media, and things have got carried away.

Primarily a right back, the 24 year old can also play as a left back, so would bring quality and versatility to Mauricio Pochettino’s squad.

Arsenal are also linked by L’Equipe, which is no surprise given the club’s interest last summer. Arsene Wenger was keen to sign the player from Lille, but Monaco swooped in and got there before Arsenal and everyone else. 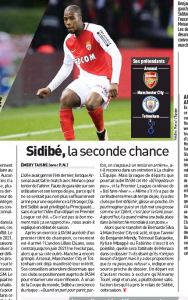 Last summer Sidibe didn’t think it was the right time to take up an adventure outside of Ligue 1, but this summer could well be different.

Arsenal, Manchester City, and Tottenham are all said to have ‘expressed interest’ and now the player’s entourage is waiting for firm approaches.

L’Equipe point out that Sidibe and some close to him have hinted at a possible move, but ultimately it will depend what, if any, serious offers arrive at Monaco.