Jose Mourinho conducted an interview with Marca for the Spanish newspaper’s Saturday edition, and on the whole it was very mild.

More fireworks would usually be expected from the combination, but the Tottenham boss didn’t say anything controversial about his current club or players, and he didn’t even send any digs towards Manchester United.

Mourinho did talk about his time at Real Madrid, and, as he sees it, how he stopped Barcelona’s dominance in Spanish football.

Well, Lluis Mascaro is having none of it. In a column for Catalan newspaper Sport he’s called the Tottenham manager a ‘bigmouth’, adding it’s always been the case and it always will be.

His ‘arrogance’ hasn’t mellowed in recent years, despite his relative lack of success. Therefore, it’s claimed Mourinho is living on past glories, and trying to make them seem more than they were.

The Sport journalist believes that during the Marca interview, Mourinho boasted of things he never actually achieved, such as ‘ending Barca’s hegemony’: ‘Florentino Perez signed Mourinho in the summer of 2010 to try to stop the ‘Pep Team’. And not only did he not 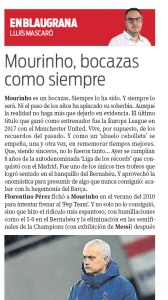 succeed, but he had the most appalling ridicule, with humiliations such as the 5-0 at the Bernabeu and the elimination in the semifinals of the Champions League (with an exhibition by Messi)’

Mourinho ‘clearly lost’ his battle with Pep Guardiola, according to Sport, and ‘at most’ all he achieved was turning El Clasico matches into a nasty war, on and off the pitch.

Anything else, is a figment of his ‘imagination’.