Home Europe ‘Name on the table’ – Insistence Leicester have given Rodgers opportunity to...
SHARE

Catalan newspaper Sport insist Leicester City have given Brendan Rodgers the opportunity to sign Philippe Coutinho, regardless of what the manager has said about the situation.

Sport have been reporting on the unlikely transfer for some weeks, and say Leicester put the player’s ‘name on the table’ for a summer transfer, giving Rodgers the opportunity.

The manager’s recent comments talking down the possibility are seen as being because the Covid-19 situation has changed Leicester’s plans for the summer.

This sounds like something of a stretch. Firstly, Sport still state Barcelona are insisting on €100m, which seems a totally unrealistic figure for Coutinho given his struggles in recent years.

Secondly, the insinuation Leicester would have paid €100m but now wouldn’t consider such an amount is an unlikely scenario. 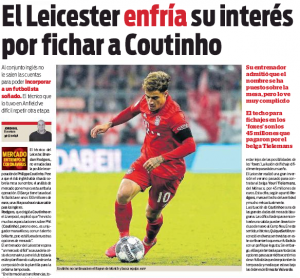 The Catalan media have said repeatedly that Barcelona would be prepared to accept a loan with a purchase option, so it would make zero sense to go for such an amount on a permanent transfer.