Barcelona midfielder Arthur will not be joining Tottenham this summer, with neither the player nor the Spanish club wanting him to leave the Nou Camp.

Reports in England this week suggested that the Brazilian could make a move to the Tottenham Hotspur Stadium this summer as part of a re-shuffle at both clubs.

Initially, it was claimed that Tottenham had enquired about the midfielder before later claims hinted he could be part of a swap deal for Tanguy Ndombele.

However, Marca have poured cold water on any rumours today, insisting that Arthur ‘will not be a bargaining chip’ for Barcelona this summer.

They report that the Brazilian does not intend to leave the Spanish club despite the rumours that say he will be departing.

He intends to succeed at the Camp Nou and believes this year, his third at the club will be crucial to him establishing himself there long-term.

He’s even put himself on a plan to improve physically, knowing that was one area that needed strengthening. 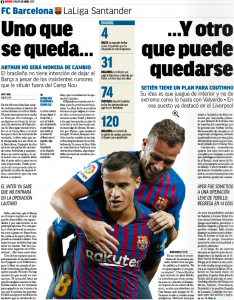 On both a personal and sporting level he feels ‘comfortable’ in Barcelona and knows that the club are the best place for him to develop.

The newspaper covers the reported interest from Tottenham but explains that rumour never made sense, as Arthur does not meet ‘the profile’ of player that José Mourinho wants.

Even if it were true, Barcelona have no intention of selling and would only consider doing so if there was an ‘exorbitant’ offer, something which is unlikely to arrive from Tottenham given the current economic situation.