Home Premier League Arsenal “There were several problems” – Emery opens up on Arsenal difficulties, his...
SHARE

For the first time this millennium, Arsenal had to appoint a new manager after Arsène Wenger stepped down in the summer of 2018.

The Gunners appointed Unai Emery as the Frenchman’s successor and the former Sevilla man guided the north London club to the Europa League final in his debut season.

Arsenal lost to Chelsea in the Europa League final and also missed out a place in this season’s Champions League as they finished fifth in the table.

Emery didn’t enjoy his second season at the Emirates as a series of poor results forced Arsenal to sack the Spaniard on November 29th.

The 48-year-old is yet to return to the management and has given an interview to Spanish newspaper Marca.

When asked what failed at Arsenal for him, Emery made a frank assessment of his tenure with the Premier League side.

“I am clear about my diagnosis and we did good things there. I think we had a good first year, taking two competitions well as Europa League and Premier League,” he said.

“The process was good. When we played possession, we did it; when we had to press, we did it. And we were competitive, playing as the game required. With moments of possession game and moments of three quick touches.”

“This second year, we have not played well; we have not defended well; We have not been competitive; We did not transmit. And I told the players myself.

“There were several problems: four captains; the Özil-Kolasinac case; Pépé’s signing, who needs time since he came from France… We didn’t play well, that’s for sure.” 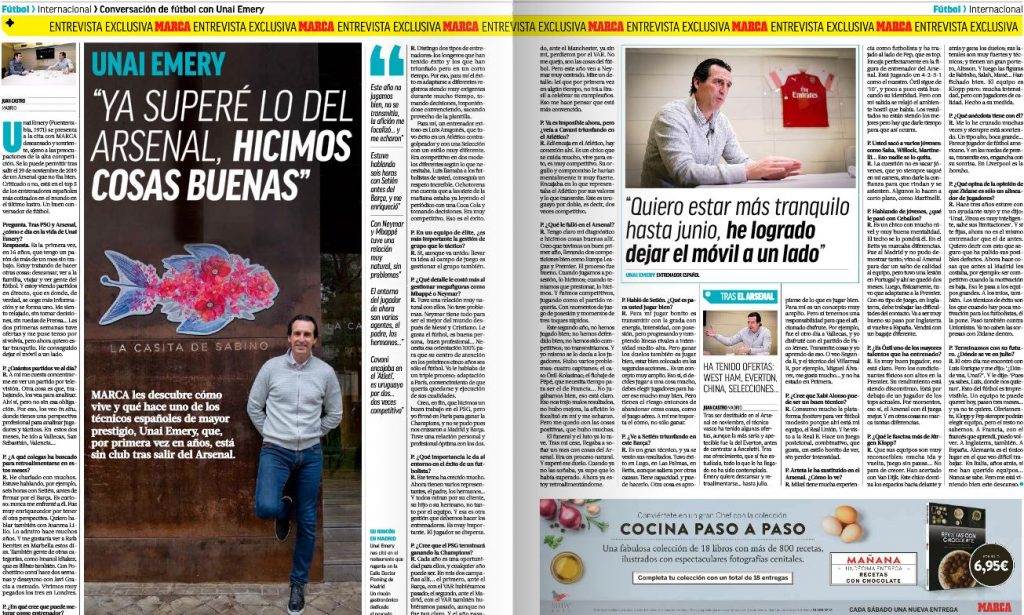 “That brought us bad results, there was no improvement, the fans focused on me and they threw me out. But I keep the positive things, there were many.

“I had the funeral and mourning. After my sacking, I dreamed a month of things about Arsenal. It was a natural process. And I overcame that. When I no longer dreamed them, I already knew that I had overcome it.”

Arsenal appointed Mikel Arteta as their permanent manager in December and regarding his compatriot, Emery said: “Mikel has a lot of experience as a footballer and has worked alongside Pep, who is top.

“He is playing a 4-2-3-1 like ours. Özil is still ‘10’, and is slowly looking for his identity. But with my departure, the hostile atmosphere was relaxed. The results are not being the best but you have to give it time to do so.”