Home Championship Sunderland player proposed to another club, could be agents at work in...
SHARE

Didier Ndong has been proposed as a potential transfer to Lyon, report French newspaper L’Equipe.

The French club have been looking to add another midfielder to their selection, likely to be for backup purposes, and someone has felt it would be a good time to offer the Sunderland player to the club.

Ndong, 23 years of age, moved to Sunderland from Lorient at the end of the last summer transfer window. The move received a lot of attention in France because of the fee it was reported Sunderland paid.

France’s RMC claimed Sunderland had put forward an offer of €20m for Ndong, and Lorient’s leaders ‘almost fainted’ in reaction. 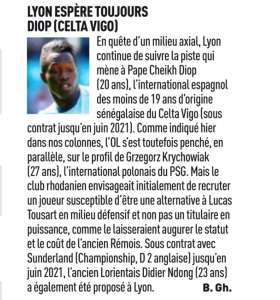 It was much more than they’d expected anyone to offer, but with Sunderland keen on a last minute deal, a big offer was one way of getting things through.

A lower fee was later claimed in England, but not so much lower, and Lorient had been knocked off their feet with the Sunderland approach.

Lyon haven’t exactly been knocked off their feet by the offer of Ndong. There’s no claim of who has proposed the player, but there’s every chance it’s an agent trying to build a deal.