Wolves were the only Premier League club to have an official in attendance as Tondela lost 3-1 to FC Porto on Saturday, report Record.

Bruno Lage’s side were joined by the likes of Valencia, Celta Vigo, Real Sociedad, Tenerife, Extremadura and Parma.

Given how many English clubs have watched Porto in the Champions League recently, it’s perhaps surprising that Wolves were the only ones to show up for this match.

Rercord heavily suggest Wolves will have been keeping an eye on Vitinha, who they had on loan from Porto last season. The only conceivable reason for that is the club considering taking the midfielder back, perhaps on a permanent basis, in an upcoming window. 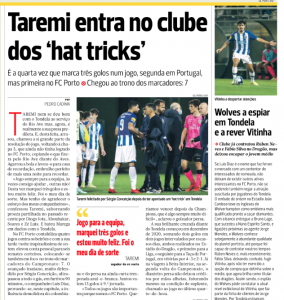 Jorge Mendes’ connections for this possible deal are made clear.

Vitinha had a reasonably good performance, but the star of the show wasundoubtedly Mehdi Taremi.

The 29-year-old forward scored a hat-trick, and thus all of Porto’s goals in the victory.