Dani Olmo has been linked to Barcelona and AC Milan this month, and it’s perhaps surprising there hasn’t been more of a fight for his signing.

According to TuttoMercatoWeb, the Spain international has not received an offer from the La Liga winners, while the Dinamo Zagreb star is of the belief a move to Milan is not the right step for his career.

It’s claimed that until Friday, there was only one proposal on the table and that came from RB Leipzig. Tottenham Hotspur and Wolverhampton Wanderers are then dragged in.

The website says Spurs manager José Mourinho would endorse signing the 21-year-old as the north London club are ‘certainly interested’ in him.

Wolves are also interested in the Dinamo attacking midfielder, but Wanderers face a problem because of poor relations between Jorge Mendes and Doyen, the agency which represents the player.

TMW adds there’s an offer of €25m from the Premier League, but they don’t specify whether it’s from Tottenham or Wolves. 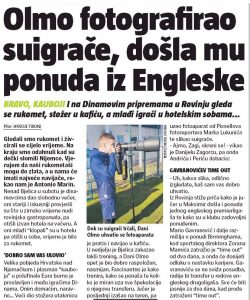 24Sata also state Olmo has an offer from England, but there’s no mention of any clubs in their report.

Croatian newspaper Sprotske Novosti claims there isn’t an official confirmation (most likely from Dinamo) about who made that offer, but some sources have them informed it could be from Wolves.

Sprotske Novosti add English sources have told them Wolves making an offer for Olmo is a possibility, while the same sources have also said Leicester and Tottenham could join the race.