West Ham United and West Bromwich Albion have asked about Bordeaux’s Josh Maja, according to L’Equipe on Thursday.

The 22-year-old left Sunderland for the Ligue 1 side in January 2019 and was largely used as a substitute until the end of the last season.

The forward managed eight goals and three assists in the previous campaign, but has failed to replicate the same form this term as he only has two goals to his name so far, despite starting in 11 league matches.

The French club are struggling financially and the forecast suggests the losses could in fact be around €80m by the end of the season.

Bordeaux are looking to raise funds through sales and the newspaper discusses the players who could be sold in the winter market. 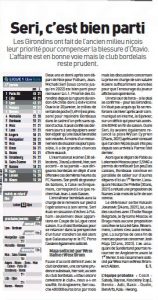 Maja is named as a ‘surprise’ player and that’s when West Ham and West Brom also get a mention.

It’s claimed the attacker ‘could return to England’ before the window closes on Monday as he’s been particularly ‘sought after’ by the Hammers and Sam Allardyce’s side.

It’ll be known in a few days if either West Ham or West Brom take necessary steps in order to sign Maja, with less than a week in the current transfer period.