Just a few short days ago, some saw Barcelona’s chances of registering signings for their Real Sociedad match as near impossible. If the club couldn’t find a way to register Lionel Messi’s wages, then surely they wouldn’t be able to do the same for Memphis Depay and co.

Still, the Catalan media were confident and now the Dutchman is expected to start against the Basque club today. So what happened? It would appear all the claims of the club needing to drastically reduce their wage bill, by at least several hundred thousand euros a week, were wide of the mark, at least when it comes to registration.

When Memphis takes to the pitch, it will make that situation very clear indeed.

Saturday saw claims that Gerard Pique had taken a big pay cut in order to facilitate the registrations. Sport report the pay cut will apply for the current season, and they add that in return, the final year of Pique’s contract, which runs until 2024, will now be guaranteed rather than subject to him making a certain number of appearances. 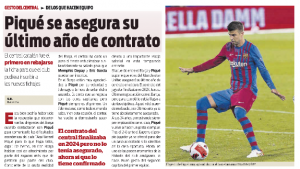 Elsewhere it Sport it’s stated the pay cut is actually a deferral, suggesting he’ll get the money back eventually. This would be similar to when Barcelona players took pay cuts last season during the peak of the Covid-19 crisis, and those turned out to be deferrals. This is how Barcelona have reportedly ended up owing Messi €52m.

Mundo Deportivo have it slightly differently, they report it was actually the final two years of Pique’s contract which weren’t automatic, meaning that if he wasn’t a regular player this season then the club could have let him go. Now it’s guaranteed all the way until 2024.

Whilst this move helps Barcelona right now, it’s another case of them adding potential issues for the future, and that’s before they start paying back those deferred wages from last season.