Midfielder Fred, much linked to Manchester City and Manchester United, made a live stream on Instagram showing the celebrations in the dressing room, especially dedicated to his Brazilian followers.

With the Shakhtar squad having had lots of Brazilian players for years, it’s woven into the club’s identity, because it was impressive to see how many guys could speak Portuguese.

Fred spoke to several teammates during the celebrations, making the live stream very informal, saying a few bad words in it. 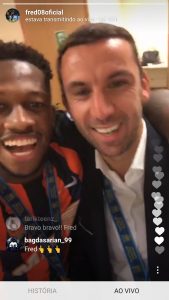 One of the Shakhtar players who participated was Darijo Srna, who’s suspended for doping, but went to the dressing room to have fun with his teammates.

As soon as he got to the room, Fred called him to speak to his followers, and Srna couldn’t wait a second before dropping the bomb.

Fred only had a laugh, didn’t comment on it, and continued the celebrations as if nothing had happened.

With several reports from both Brazil and England saying Pep Guardiola and José Mourinho are fighting for the player this summer it seems that the battle is not over yet. Fred himself has talked openly about moving to Man United or Man City, and it’s clear he’d be thrilled with either.