Following the many turnarounds we’ve seen on the Pierre-Emerick Aubameyang case today, here’s another surprising one.

Despite the many claims saying the striker’s move to Barcelona was off, club president Joan Laporte has within the last hour insisted ‘there’s hope’ they could sign the player from Arsenal.

Now according to the latest update brought by Sport, an intermediary from the player’s camp is at Barça’s offices along with Blaugrana officials Mateu Alemany and Jordi Cruyff, working on this case.

The outlet points out that Aubameyang is ‘one of the most liked players in sports management’ ay Barcelona, and the Camp Nou side shall continue to try his incorporation in the final hours of the transfer window.

Barcelona are facing difficulties to get the transfer done, as they’d likely need to sort out the departure of Ousmane Dembele and then use the money to pay the Arsenal player. The Frenchman is being linked with moves to Chelsea and PSG.

Aubameyang, meanwhile, is also said to be in Spain waiting for the situation to develop. 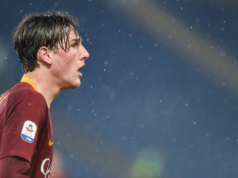 Conte ‘insisting a lot’ to Paratici, wants player at Tottenham –...