Southampton wanted to sign Joakim Mæhle in both the transfer windows of 2019, but Genk turned down approaches made by the Saints.

Last September, the 22-year-old signed a new four-year deal with the Jupiler Pro League side.

With regards to the Premier League club, the newspaper states Southampton’s interest in the fullback is ‘not new’. They have already knocked on the player’s door, who has also received interest from the Serie A side.

It’s claimed neither the English side nor Atalanta have not approached Genk for Mæhle and a move away from the Belgian club remains unlikely.

That’s at least what their technical director Dimitri De Condé believes and he revealed an agreement to keep the player at Genk until the end of next season.

“We have internally decided not to let our stars leave during the summer market,” De Condé explained. 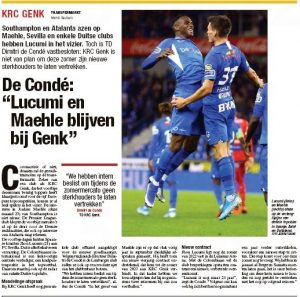 “In case of Maehle, we made clear agreements in this regard last September. He then signed a new four-year contract, which will keep him at KRC Genk until the summer of 2023.

“In that context, we then agreed that he would play football with us for at least two more seasons.”

Mæhle has one goal and four assists from 33 appearances in all competitions this season.