Home Europe Southampton look to have a rough transfer plan, even if target not...
SHARE

As reported by Portuguese newspaper Record today, the ‘Derby Portuense’ has attracted scouts from five different countries, and there were obviously some Premier League sides there.

Southampton were one of the clubs who had officials at the match between Boavista and Porto, which ended with a 1-0 win for the Dragons.

Porto didn’t have a brilliant performance, but found the win thanks to a long shot by left-back Alex Telles, who continues impressing for the club.

For Boavista, defender Ricardo Costa and midfielder Rafael Costa had a pretty good match, but that wasn’t enough to hold the stronger side. 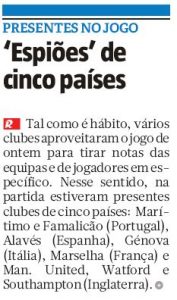 There’s a reason why we shouldn’t make Southampton’s trip so special. That’s because the club have been scouting several games in Portugal lately, and some of them sound pretty random, such as Aves vs Gil Vicente this weekend and Braga vs Famalicão a week before.

The Saints have even been linked to a Porto player before, Sérgio Oliveira, with claims from two years ago saying there had been a bid for him. But the midfielder has been struggling with injuries and only played the league’s opening match this season. So the scouts probably knew he wouldn’t be featuring last night.

There’s a good chance Southampton are looking to recruit from Portugal in coming windows, yet it doesn’t appear they have a target nailed down at this time.