While we’ve done a number of articles mentioning the future of Wesley Hoedt at Lazio, few have been as blunt as the one published in Corriere dello Sport today.

The Dutchman, who never found space in Ralph Hasenhüttl’s plans at St Mary’s, was sent on loan back to his former club in hope of him recapturing his form and increasing his market value.

He’s managed to do everything but that, committing big mistakes in important games and overall disappointing Lazio, Simone Inzaghi and the club’s fans with his performances.

Looking at the summer ahead, Corriere dello Sport put it plain and simple: Hoedt ‘will return to Southampton’, having been firmly ‘rejected’. 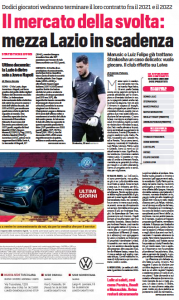 That means Hasenhüttl and those in charge of transfers at the Premier League club will be given the headache inducing job of devising a plan around the centre-back’s future, whose contract in England expires in 2022.

It’ll either be cutting his stay short, thus biting the bullet and releasing him a year early or finding a club who will be willing to give them some of their initial £14.4m expenditure back.