Home Europe Concern for Southampton as player ‘has become target of insults, even very...
SHARE

It seemed to be all going so well for Wesley Hoedt at Lazio, sent there on loan by Southampton in the summer, but, in the space of 71 minutes, it’s all come crashing down.

The Dutchman was given a start in the Coppa Italia clash against Atalanta on Wednesday night, but his performance was terrible to say the least, at fault for pretty much every goal conceded in the 3-2 loss.

With Lazio paying €1m up front to bring him back and with the option to make the move permanent for €6m, there was hope a good season, albeit as a rotation option, could save him from his St Mary’s situation, but that’s somewhat put in question on Friday.

Gazzetta dello Sport dedicate a lengthy article on the matter in their paper edition, explaining that despite his apology on social media, the player ‘has become the target of insults, even very heavy ones’.

The recent arrival of Matteo Musacchio hasn’t helped his case either, but they haven’t forgotten his humility when it came to asking for forgiveness regarding his unsavoury exit from the Serie A side the first time around. 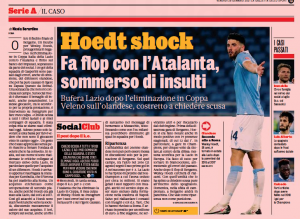 He ‘did everything’ to return to Lazio, ‘admitting the mistakes of the past’, and ‘even after the flop against Atalanta, Wesley Hoedt will try to get up again’.

Apologising in the dressing room to his teammates as well as on social media, the Dutchman will now ‘be on the bench in Bergamo’, where Lazio face Gian Piero Gasperini’s side once more, this time in Serie A.

This is seen as a ‘restart, not as a punishment’, but Southampton will be keeping a close eye on things going forward, without a doubt.